When is half price the real price?

About now I reckon with these two Eaglehawk reds.

I wandered into the Liquorland store at Budgewoi last week and noticed they had the Eaglehawk range at a mere $5. HALF PRICE the signage screamed! I resisted the temptation  to see which price the quality of the wines really warranted. I yielded on Sunday when I paid a visit to Dan Woolworths in Bankstown [I get around, you know] and saw them at $4.99. 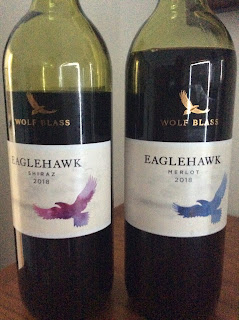 My decision was rewarded at the checkout when I said “There appears to be a price war on Eaglehawk”. She replied, with commendable corporate loyalty that someone had it at $5 and as always her company beat it. “We always do” she emphasised with eyes sparkling with pride. It was impossible not to respond to her enthusiasm “Yes, you SMASHED it” thinking how fortunate I paid by card for that two cent savings.

The two I purchased were both 2018, both reedy thin and verging on transparent. One was a Shiraz, the other a Merlot. At least that's what the labels said. I suspect most cask reds offer far better quality and certainly better value.
How anyone would pay $10 for these in today's market is beyond me. Even $5 is hard to justify.

Posted by The Outstanding Wineman at 3:00 PM No comments: 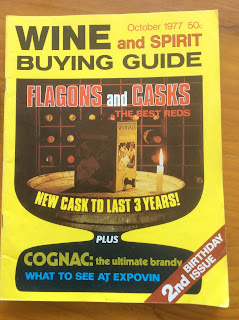 In their second anniversay issue Wine and Spirit Buying Guide magazine reviewed red wine offered in casks and flagons. This was the time when the newly invented "bag in a box"was still struggling with problems of leaking and oxidisation.
The panel tasted 110 wines - 74 flagons and 36 casks.
They culled this down to just 30 flagons and just 9 casks that they considered worthy of reviewing.

The top wines were: Penfolds Rose, Orlando Coolabah Burgundy, dÁrenberg Dry Red  and Tyrrells Hunter River Dry Red flagons along with the Orlando Coolabah Rougolais cask. It was the time when it was sadly acceptable to label Australian wines claret and burgundy while      shiraz was regularly called Hermitage 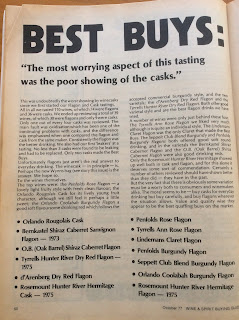 I love their conclusion
"The moral seems to be - buy casks for everyday drinking but buy carefully, and buy flagons whenever the situation allows" 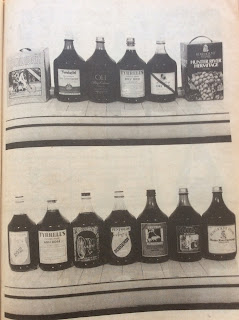 Posted by The Outstanding Wineman at 1:20 PM No comments:

4 things you should know about Fiano

2. Almost became extinct last century due to its low yields. It survived due to a resurgence in interest in native varieties and a recognition of its quality.

3. Probably first introduced to Australia by Coriole's Mark Lloyd in 2005. That's McLaren Vale. Now it's all over the place with styles ranging from dry and flinty to more textural and complex. Some feature wood while others don't

4. It's characterised by loose bunches, thick skins and high natural acidity. That gives winemakers plenty of opportunity to spin their magic.
Posted by The Outstanding Wineman at 4:10 PM 2 comments:

No wonder the French got upset

We spent a week in 2018 touring around Epernay in the heart of Champagne. Each day we hopped onto a mini bus that took us to tour and taste at champagne houses I'd never heard of. Some were simply houses in villages with cellars and production facilities that must have extended under all the neighbour's houses. We wandered around Epernay where many of the larger producers offered tasting flights for around 10 euro. 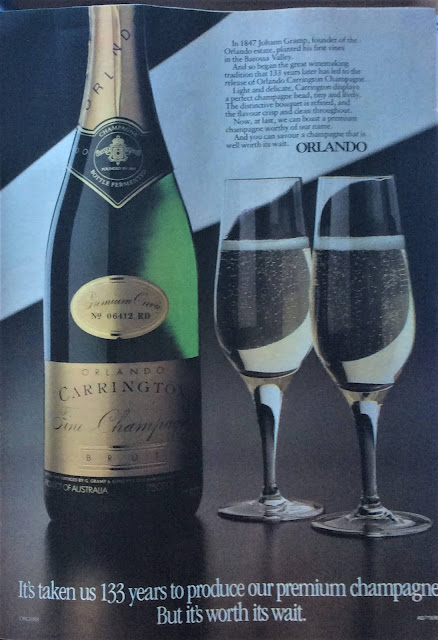 The number one thing I learnt is no-one can afford to produce bad champagne. The Champagne Police keep a close eye on things. Plus he price of land is so high it virtually dictates a minimum price for the stuff . And as we all know, that's not cheap. Unlike Carrington which always seemed to be available somewhere at $4.99.

So I had to laugh when I came across this ad in a 1980 issue of TIME magazine. No wonder the French got upset even though it doesn’t excuse nuclear testing in the Pacific. Champagne is made in Champagne, not Australia or anywhere else in the world. Not even in other parts of France. Ironically a French multi national, Pernod Ricard, took ownership of the company and the brand a few years ago. The word champagne was rightfully dropped from the label a few years prior to that.
Posted by The Outstanding Wineman at 2:41 PM No comments: 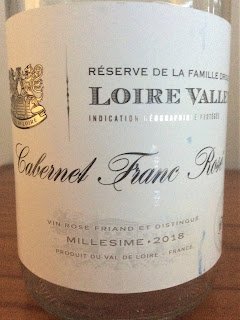 This is a new addition to Aldi's shelves and it's a beauty. It's crisp and dry with delicious fruit on the nose and palate. Palate weight is light and yet there's enough to make this a really satisfying wine.
Cabernet Franc is THE red grape of France's Loire Valley and used to make all types of styles from full flavoured reds to sparkling wines. And of course delicious roses.
Very highly recommended.