I've been fascinated and often amused by the "geographic feature wine branding justification" syndrome that has emerged in the last 20 years. Take a creek, river, bay or babbling brook and add a prefix which you justify on the back label. And if you don't want anything watery you can always look to the hills, ridges and valleys.
Toss in the odd laughing magpie, idiot, duck, etc and the sky is the limit.

While Graves Gate satisfies all the criteria of the syndrome it has undergone a strange morph over the last three years. In 2006 on the back label of a shiraz that we sold hundreds of, these immortal [sorry] words appeared:

"Two early-settler lasses are buried near the gate to our shiraz vineyard. Their souls seem to keep those old vines alive and perky. Bright raspbery, pickled cherries, black olives, lipstick, spicy sweat,: they're coming down the hills with a picnic basket. Laughing." Greg Clack winemaker

The weird thing is though that, while Chain of Ponds makes a point of satisfying the naming syndrome with a series of local references on many of their wines, this 2006 release was 66% Barossa and 34% Kangaroo Island. This is confirmed here
http://www.chainofponds.com.au/pdfs/Graves%20Gate%202006.pdf
although you will see a suggestion that the bottle is actually 200% full. Maybe that's why it was so popular.

Moving on to 2009 and Graves Gate has reverted to being 100% Adelaide Hills, and only 100% full, but alas no lasses. The back label now reads
"Named in memory and as a tribute to the families who lived at ‘Chain of Ponds’ from 1840 - 1970. All that now remains of the hamlet is the cemetery and its recently erected stone entrance which protects the history and stories of days gone by." So what's going on? I ask.

But just in case you're wondering, this is a damn fine South Australian shiraz probably even better than the 2006 and equally outstanding value.

SOLD OUT
Posted by The Outstanding Wineman at 5:42 PM 3 comments:

My first thought on tasting this is that we need more sangiovese.
Like Chain of Ponds Nebbiolo this is a stunning red based around layers of fruit complexity.
If you just looked at the figures you'd say too much alcohol [15%] but that's not noticeable and way too long in wood [24 months]. Once again not an issue as it seems to be older French oak used.

The end result is what matters and this is a truly exciting red that easily delivers well over the $20 quality mark. It's probably not a long term cellaring proposition but once you've tasted it you'd find that rather difficult.
You can read more at
http://www.chainofponds.com.au/pdfs/Sangiovese%202008.pdf

SOLD OUT
Posted by The Outstanding Wineman at 4:57 PM No comments:

I was tempted to copy and paste [with appropriate referencing of course] Chain of Ponds website tasitng notes but I thought I'd keep it simple.
This is simply stunning and I can only ask how a 6 year old wine of this quality can still be available at this price today [June 2011]
It's medium bodied, showing some lovely bottle maturity but still offering layers of fruit complexity. And if you want to try something really worthwhile that's out of the mainstream this is an absolute must.

On second thoughts read their notes but I do worry about "thick orange hues"
http://www.chainofponds.com.au/pdfs/Nebbiolo%202005.pdf

Posted by The Outstanding Wineman at 4:42 PM No comments: 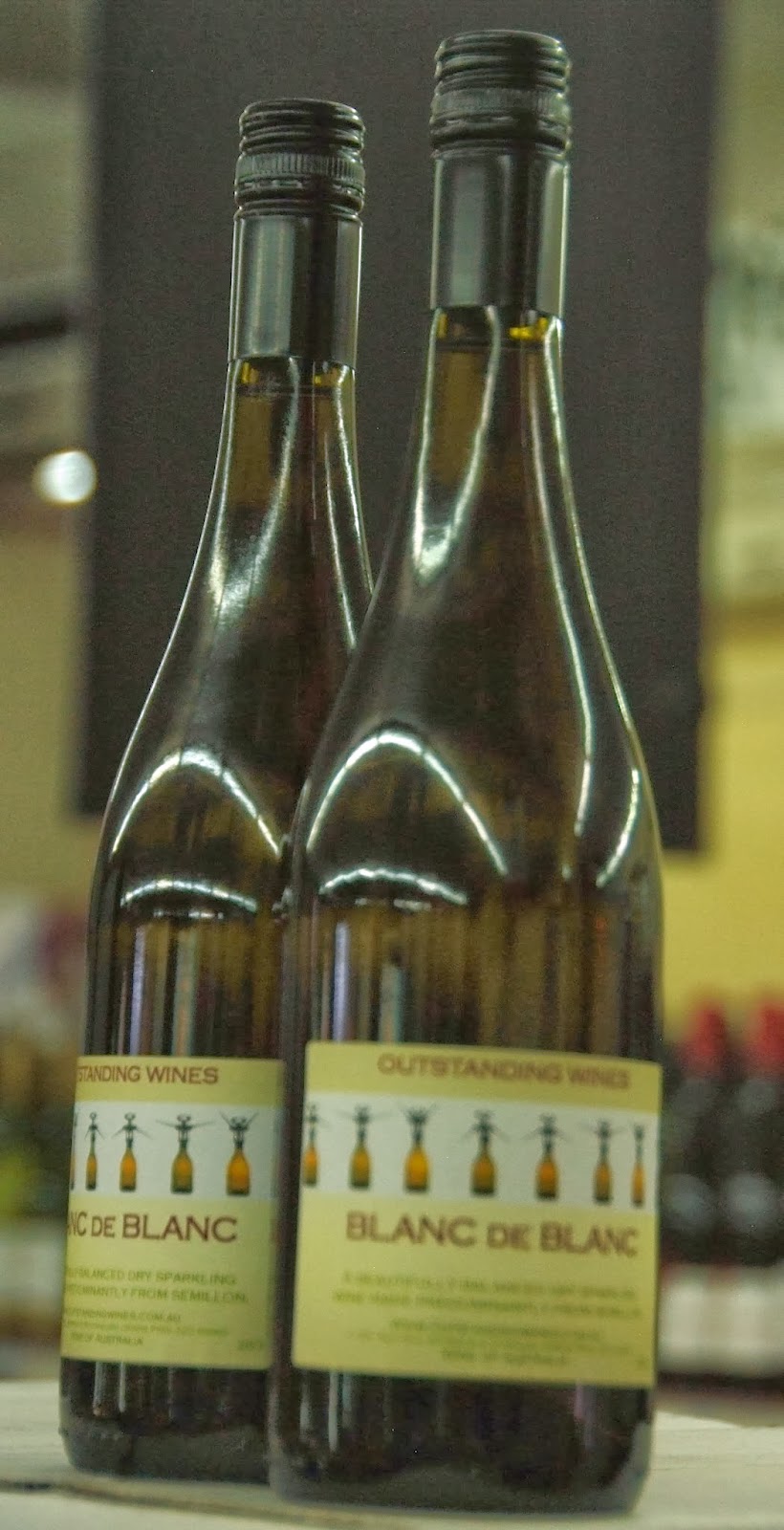 The wine formerly known as Ridgecrop Estate has received a much needed facelift and two other changes which are far more important.
For starters it's now under screwcap which makes it easier to open and easier to reseal if you want to enjoy it over a few days. Better still, the wine is even better than it was before. The Semillon now seems to be providing a delicious lively citrus zing to the mix which wasn't apparent before.

THE OLD STORY ABOUT RIDGECROP ESTATE BLANC DE BLANC
For years and years we have been happily raving about the Clare Valley's Stephen John Blanc de Blanc. It's invariably been our biggest selling sparkler at our various retail outlets and always been well received on the restaurant wine lists we compose.

So "shock and horror" when the phone call came that Stephen had literally pulled the plug on production. So we called for samples and in amongst a lot of overpriced and characterless fizz this little gem absolutely shone.

It's made from Hunter Semillon and I've always been surprised there's not more of the stuff dazzling on the sparkling market. This one is grossly underpriced, dry with vibrant fruit character and palate weight complexity. And in the space of just a few months it has seamlessly and happily replaced the SJ.

VERY HIGHLY RECOMMENDED in the up to $20 market.

Our Price: $10 per bottle by the dozen

SOLD OUT
Posted by The Outstanding Wineman at 2:52 PM No comments: