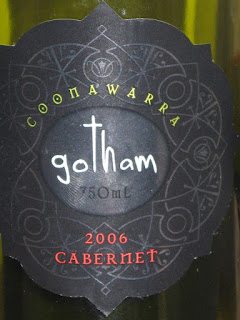 I may have told you this story before but regardless it's worthy of being told again. Not so long ago a VERY senior winemaker employed by a VERY voluminous producer was asked for the secret of making successful Cabernet Sauvignon. His reply was "Make it taste like Shiraz".
Which goes along way to explaining the long time shortage of finding cabernets that actually taste like the grape from which they were made. I want to taste Cabernets with tannin and acid that ooze blackcurrant. And don't cost the earth.

Last week the Gotham 2006 Coonawarra Cabernet Sauvignon was submitted and it's a cracker. You have no idea [actually you probably do] of how tempted I was to do a "Crazy Coonawarra, Batman" as a heading.. It's a crazy name with one of the wackiest labels we've seen in a longtime and neither do the wine justice. It opens with a fairly overt cool climate nose. There's a fair bit of capsicum and a touch of earthiness which I'm glad disappears within 20 minutes or so. There's none of that on the palate which starts off reasonably subdued and then just blossoms. Wood is there but it's the rich cabernet fruit and acid balance that make this such a top drop. Alcohol is a sensible 13.5% and the winemaker is Peter Douglas which goes a long way to explaining the quality of this wine. We road tested it over 4 days and it just kept on getting better so it's one to consider for the cellar. Very highly recommended.

SOLD OUT
Posted by The Outstanding Wineman at 2:25 PM